Could the UN better protect civilians by entering Syria without the regimes permission?

In Brief: Humanitarian access without regime permission and safe areas in a small part or parts of the country would make a serious improvement to the life chances of thousands of Syrian civilians.

Nowhere in Syria is safe and the risk of death looms large for all of Syria’s civilians. The UN and humanitarian agencies still do not have unfettered access to the most vulnerable civilians and even where they do have limited access, government bureaucracy creates delays and security is precarious for them and for the civilians they seek to assist.

Continuing to insist on unfettered cross-border and cross-line access for the UN and humanitarian agencies is still vital, but for how long will UN humanitarian agencies wait on a regime that is committing crimes against humanity to give it full access when it is clear the regime is deliberately and arbitrarily denying that access?

In the UN Secretary Generals second report on implementation of UN Security Council resolution 2139, he states: “The UN is ready to take any steps possible to facilitate the impartial delivery of urgently needed humanitarian relief to those most deprived in line with international humanitarian law and the humanitarian imperative to care for the wounded and sick.”

Calls are also increasing for the UN to send its humanitarian agencies across the borders to deliver aid where it is safe enough to do so. This is undoubtedly the right call and there are many in the UN itself who would agree with this call.

To really be effective though, humanitarian workers would need secure, durable and lasting access at key border crossings such as Bab al-Hawa and Bab al-Salam where there were no excessively bureaucratic hurdles to negotiate and no risk of arbitrary denial by the regime. These two crossings on the border with Turkey are currently controlled by opposition armed groups. 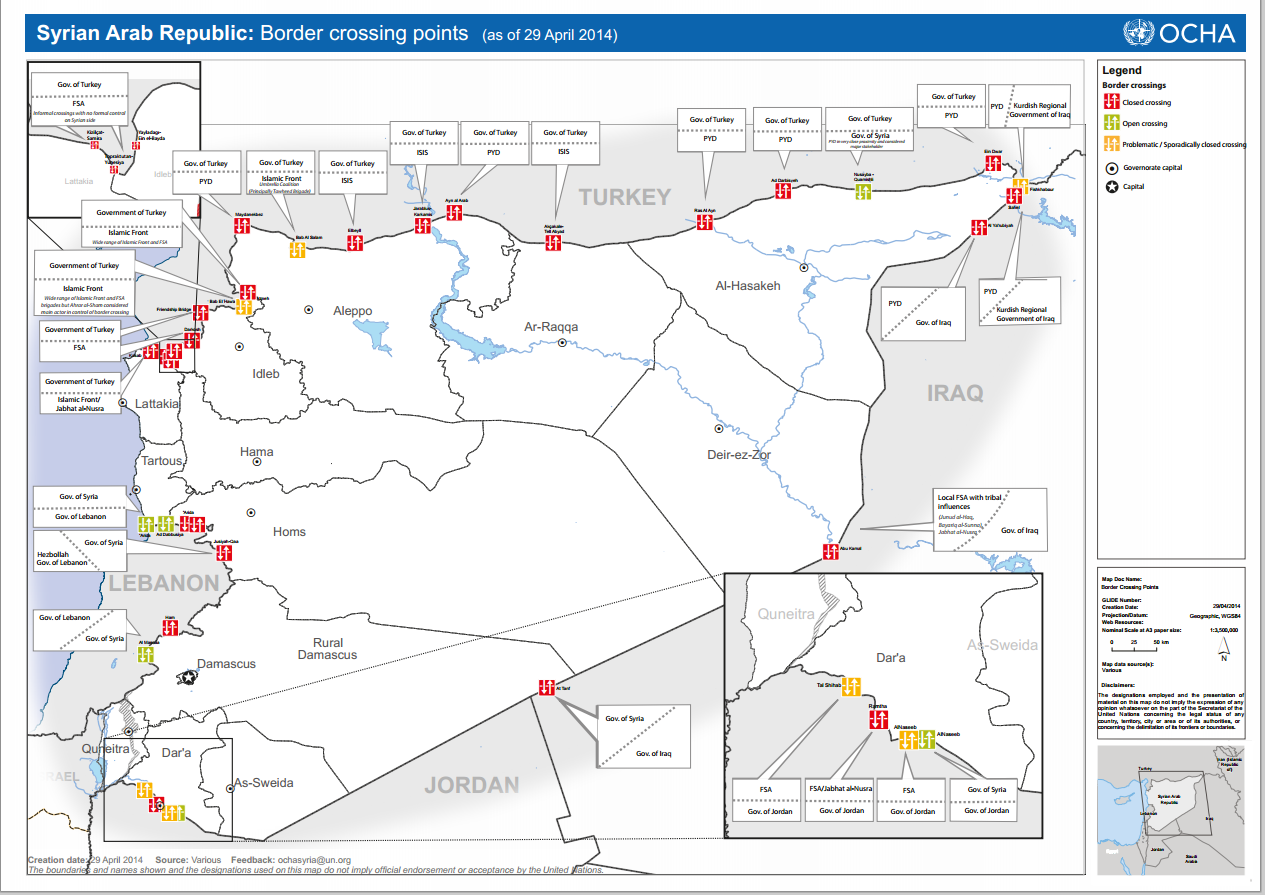 Ban Ki-Moon says in his most recent report: “The time for extended access negotiations and waiting for permits and clearances should be over. People are dying needlessly every day.” So taking account of this, the need for sustainable access to civilians in need and the UNSGs statement that the UN is “ready to take any steps possible”, could the idea of safe zones inside Syria, which are purely to protect Syria’s vulnerable civilians, be a viable proposition?

A key component of viability would be whether such a proposition would be acceptable to the parties to the conflict. It seems strange to think protecting vulnerable civilians from starvation, disease and bombardment could be unacceptable to some, but that is the stark reality of this brutal conflict right now. Some would suggest it is ludicrous to still think the current regime would ever permit unfettered access purely on the basis of the humanitarian imperative to protect civilians when that same regime is punishing, humiliating and terrorising those civilians on a daily basis. I agree – we are long past the time when the states claim to sovereignty is more important than protecting civilians in need.

The idea of safe zones in Syria, maybe in the immediate catchment areas of those two key crossing points I mentioned, is not new but is worth revisiting given the growing humanitarian crisis and failure at the Geneva talks. The UN Secretary General’s 60 day report states clearly that the parties to the conflict are still failing to adequately protect civilians inside Syria and the humanitarian situation is not getting better - it is degenerating daily. Paragraph 17 of the unanimously-passed resolution from 22 February 2014 states that the UN Secretary General should:

..report to the Council on the implementation of this resolution by all parties in …30 days of its adoption and every 30 days thereafter, and upon receipt of the Secretary-General’s report, expresses its intent to take further steps in the case of non-compliance with this resolution

It is clear the resolution is not being complied with. Now is a moment of truth for the UN Security Council, concerned countries and the UN Secretary General to define, propose and implement those much needed ‘further steps’ to protect civilians. The idea of safe zones is understandably controversial for some, memories of Srebrenica are still present and a number of tough questions, especially around security for aid workers and ongoing UN operations inside Syria, would need to be addressed by such a proposition. For instance:

Can the parties to the conflict agree to an area or areas in Syria being given up so UN protected safe zones can be established? If they can’t within the next month or so, should the UN enter regardless, where it is relatively safe to enter? For me the answer is a clear yes.

It would need to be made clear that such safe areas would need to be only for civilians in Syria. Whether access to aid and protection could or should be prioritised is a wider logistical matter but vulnerable categories of civilians could include:


Access to assistance would need to be without discrimination, i.e. regardless of actual or perceived political or religious affiliations. To limit the admittance to only civilians would mean screening areas to ensure those getting in were not armed.

Can all the parties agree to allow a protection force to secure safe access for humanitarians and operate within safe areas? If they can’t within the next month or so, should humanitarians proceed with the required security anyway? Again I would say yes.

Composition of a protection force would need to balance sensitivity to the local context but also those who have the expertise, resources, capability and resolve.

To protect those civilians and humanitarian workers from threats, such a force would need a robust mandate or rules of engagement and be well equipped. It would need a strong command and control system with a clear accountability chain, fully compliant with applicable international law.

Can all the parties agree this would not be belligerent occupation?

Parties to the conflict would surely need to be reassured that safe zones and a force employed or created to protect those inside it are not a hostile army seeking to occupy or annexe territory. So agreement from the parties to the conflict, especially the Syrian authorities is, in theory, important - but as stated above, not the priority. What would need to be made absolutely clear is that such zones would simply be an area where Syria’s civilians can access vital humanitarian assistance, and enjoy a higher level of security from a conflict which does not look like it will end anytime soon.

The imperative here is to de-link the idea of using safe areas to protect civilians from the current and debilitating obsessions with geopolitics and militarism, and locate international priorities and resources in the service of the most vulnerable people in Syria. Safe areas in a small part or parts of the country will not end the armed conflict across the rest of the country and will not be able to help everybody in need but if implemented properly would make a serious improvement to the life chances and the enjoyment of rights for thousands of civilians in Syria.

Not necessarily. If there is agreement on the need for safe areas to protect Syria’s civilians, then what need is there for military strikes against the Syrian military or its associated militias? As stated, this would need to be a demilitarised zone, apart from an international presence to provide protection. It should not be a place in which any Syrian armed opposition groups can seek shelter i.e it should maintain a humanitarian and impartial character. However, as intimated earlier, agreement from the Syrian authorities is unlikely and entering into a process to secure agreement should be strictly time bound to a matter of weeks as opposed to months. Given that the regime are adamant their sovereignty takes priority over civilian protection, such a process of consent would really only serve to prove to those unsure of such a proposition that all measures, such as via the UNSC, have indeed been credibly exhausted. Exceptional circumstances call for exceptional measures – those measures should not make matters worse for civilians though as many previous proposals to intervene into Syria could well have done.

There are many other questions such as where would it be located and which border crossing(s) should it have control over? I've suggested above some of the immediate catchment areas encompassing and between Bab al Hawa and Bab al Salam. How large would it need to be? How would civilians not already in the proposed catchment area(s) get there safely? How much would it cost and how would it be financed, secured and operationalized, and by whom? Could a new Security Council resolution be agreed upon to even establish such safe areas and after UNSCR 2139, is a new resolution even needed or the process of securing a new one even wise? Over three years into this crisis and there are still so many hurdles in front of simply protecting civilians inside Syria. But these questions need to be asked – saying UN humanitarian agencies should enter Syria without permission is far easier said than done.

Actions outside the UN Security Council

There are multiple scenarios if a proposal for safe zones via the UN Security Council route fails or is not sought. Whilst a UNSC authorization may be preferable for many in key governments and within the UN, securing international consensus would likely prove too much for Russia and possibly China as they, as a matter of misguided principle, prioritise their own understanding of state sovereignty over a clear responsibility to protect civilians. In such a situation, eyes are on the UN, humanitarian NGOs and countries willing and able to protect civilians to step in and proceed with access and the establishment of safe areas regardless of the lack of UNSC authorization or regime permission. The UK government issued its own legal analysis on the responsibility to protect in January 2014. It was clear that:

Well there is clearly a humanitarian catastrophe within Syria and humanitarians entering Syria without government permission and establishing safe areas to alleviate some of the excesses of this conflict is actually quite a modest suggestion. That it isn't even being publicly discussed yet at the UNSC speaks volumes about the level of priority many in the Council and parties to the conflict actually give towards civilian protection in Syria.

I hope the debate in the next few weeks,  as we take in the UNSGs 60 day and 90 day reports on UNSCR 2139, will be dominated by those saying it is ethical and legal for the UN and other humanitarians to enter Syria without Syrian government permission. Security for aid workers will be necessary and needs to be taken seriously as does possible risks to ongoing UN operations but shouldn't be a reason to shy away from bold, innovative and carefully assessed solutions to protect Syria's long suffering civilians.

Posted by Kristyan Benedict at 20:54